For some time now I have been intermittently working on painting a number of Maori miniatures for use on the wargames table. The project was from the start based around the De Bellis Renationis (DBR) wargame rules which I felt could be easily be developed to cover the inter-iwi conflicts of the early 19th Century as well as the earlier pre-contact period.

The figures for this project are all in 15mm scale with the figures purchased, initially from Evil Gong Miniatures in Australia. More recently some additional reinforcements have been provide by Micks Metal Models in the UK.

The initial project into several phases. The first was the completion of sufficient figures to allow medium sized games between Maori and european explorers in the mid to late 17th Century. Not as fictional as you may first consider given Abel Tasman’s discovery of New Zealand in 1642 and the significant Dutch and Portuguese presence in Asia and the Pacific during this period. In DBR terms the initial batch of Maori comprised some 300 points of troops, around 40 stands of figures. Most of the figures were warriors along with a few scouts all armed with traditional weapons. At the same time this army could be easily divided in two for some small inter-iwi engagements with 1000-2000 men per side. These little excursions have been first class I must say and reinforced my view that DBR would work well for the inter-iwi battles.

More recently I completed the next phase of the project. That is the expansion of the Maori in preparation for the larger battles of the inter-iwi Musket Wars as well as some larger fctional Renaissance wargaming of the 17th Century against European interlopers. This second batch of miniatures bought the total number of stands to some 57 stands of warriors, including three command stands, all in close formation and some 12 stands of skirmishes. When deployed on the wargames table the spectacle is impressive. Below, a portion of the Maori cross a river during a wargame. 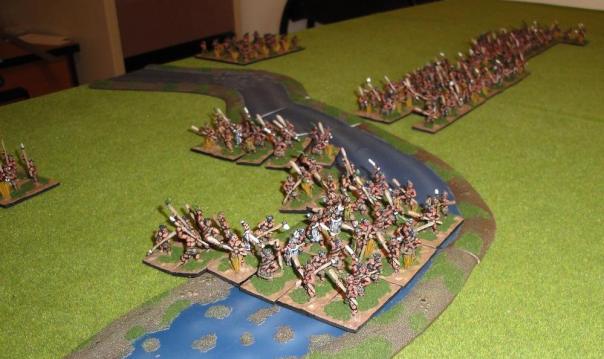 Next on the painting front is the completion of more command stands and the first musket armed tua, as well as photographing some of the support elements recently completed…

The following is a short account of an engagement between two Maori iwi (tribes), the Ngapuhi and Ngati Whatua. The game, fought in “The Wargames Room”, used 15mm miniatures.

Ngapuhi and Ngati Whatua had been involved in a series of small raids and counter raids for some years. One such took place in the 1780s when the Ngapuhi, led by the rangatira Tuwhare, sent a large taua to seek revenge, or utu. At the head of some 1,650 warriors Tuwhare made good progress travelling down the east coast past Hokianga. While much of his taua travelled light it still contained a significant amount of supplies and an increasing number of slaves it acquired on the march south.

Meanwhile the Ngati Whatua had heard of the dispatch of the taua and gathered a slightly larger force under the great rangatira Murupaenga (Alastair) to oppose it. Abandoning baggage and moving rapidly Murupaenga moved forward and selected a battlefield he hoped would provide him with some advantage. However, to Murupaenga frustration Tuwhare had managed to seize some high ground opposite. Now, Murupaenga divided his own 1,900 warriors into four groups and contemplated how he may dislodge Tuwhare and his Ngapuhi from the high ground. Finally he determined to realign his main body and to advance in two groups one against each hill. His reserve line would eventually move up to support the gap that would open in the centre. Above, the two taua deployed with Ngapuhi in the foreground. Murupaenga has started to swing his warriors forward to attack the hills opposite.

Tuwhare however had achieved his aim and now hoped to gain advantage by the exposed flank of the Ngati Whatu. He now pressed forward with his small reserve in the centre intent to fall open the open flank presenting itself in the centre. 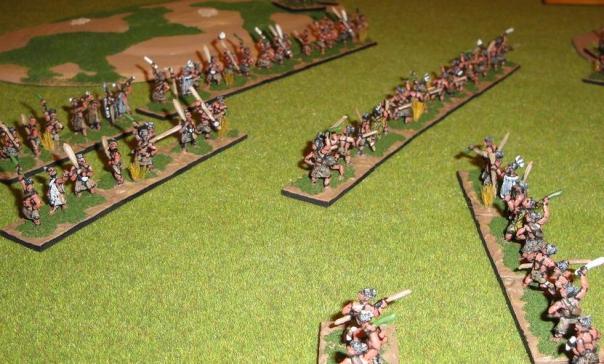 However, Murupaenga realising the ferociousness of the charge now signalled a general attack and the Ngati Whatu also surged forward with patu and taiaha.

A confusing melee now ensued on the Ngapuhi left flank and would soon extend itself to the right as well. In the ensuing combats the Ngati Whatua slowly started to gain the advantage. Tuwhare however continued to press froward breaking many additional groups of Ngati Whatua that were encountered. 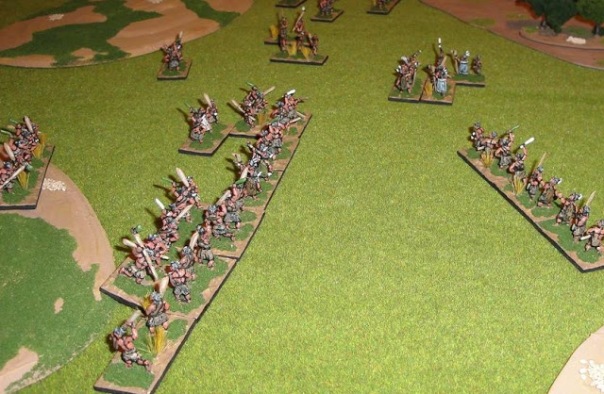 Above, the Ngati Whatua attack the Ngapuhi right wing. In the top right Tuwhare continues forward attacking Ngati Whatua reserves and destroying all before him.

While Tuwhare swung ruthlessly at his assailants with his mere, the pu kaea (trumpet) bellowed encouragement to the now struggling and out numbered Ngapuhi who counter-attacked on the right. Below, on the left, the Ngapuhi sweep forward from the high ground on the right flank. On the right of the photo Tuwhare presses relentlessly forward having dispatched more of his enemies.

However, despite Tuwhare’s heroic deeds the Ngapuhi losses were now becoming crippling. As Ngati Whatu surged forward in the centre towards the Ngapuhi baggage the Ngapuhi broke and fled the field.

The losses had been heavy for both sides. Some 750 Ngapuhi had been lost while almost 600 Ngati Whatu had fallen. However, while Tuwhare fell back, his mana very much intact, the cooking fires of the Ngati Whatu were being readied. Tuwhare’s revenge was far from complete and the scene was set for further war.

Some additional notes on the game. The battle was fought using the DBR rules, which I use for my Renaissance gaming as well as inter-iwi engagements, and 15mm figures. Using DBR’s “Normal Scale” each stand represented 100 men, or 50 if representing skirmishers or scouts. The table measured 1.2m x 0.9m. The two armies each comprised around 130 points of troops. The game was fast moving with the Blade(F) rating encouraging both armies to charge home, often with dramatic results. The Ngati Whatu had a lower army break, due to the fact they had no baggage, but additional warriors.

"Nothing was so valuable or respectable as strength and courage... Cannibalism was glorious. The island was a pandemonium" - Frederick Maning